Here is the second installment from my collection of stories In Love with the Dead. For Part 1, click here.

A woman of about 35 sent him a yellow envelope with a photograph and the requisite dollar. He stared at her image, at her flawless skin, her troubled green eyes, and her mane of auburn hair that went down to her navel. On the back of the photograph was an note in neat and rounded penmanship: I am pretty and popular, yet I am still a virgin. This took Bruce’s breath away, and though he was aware that it might seem unethical, he contacted the woman immediately and invited her to the house. His purest intention was to offer her a cup of Lady Grey, then show her the stacks of letters from other virgins—male/female, ugly/beautiful, some as old as 93.

Marjorie arrived the next day wearing a lavender dress, white gloves, and a large straw hat. Over tea and biscuits, she told him she was an only child, adopted by a couple who couldn’t keep their hands off each other. They paraded around the house naked, making love whenever and wherever the spirit moved them. They even died in the act on a cruise she was not invited on when she was 14. “Seems they climbed into a lifeboat, which spilled them into the ocean in the middle of the night. I swore I’d never be like them.” Bruce noticed that she related the story without emotion, as if she had told it many times before, but that her bottom lip quivered when she whispered, “I think it’s time to let go of my grudge. Before it’s too late.” Soon after tea, Bruce gave her back her dollar and took care of her problem.

Marjorie quit her job in the listings department of the local telephone company. She had started as a proofreader 15 years earlier, and had worked her way up to supervisor of production, with a staff of 20 beneath her. After a quick wedding at City Hall, she moved into Bruce’s house and became his assistant, taking it upon herself to organize the secrets with the same zeal she had applied to the phone book all these years. “Have you ever seen a name misspelled or a business in the wrong category?” she inquired when Bruce asked her whether she knew what she was doing.

First, she opened all the neglected envelopes as well as those that arrived on a daily basis, then divided the secrets into groups: Physical, Emotional, Spiritual, Sexual, Psychological, Criminal, Edible. At the end of each day, she put on her straw hat, and deposited the dollar bills at Bruce’s bank on Bank Street. Though Marjorie didn’t thrill in the secrets like her husband did, it satisfied her greatly to put some order to them, and as a result, to the house. It gave her the impression that the world could also be ordered, one room, one secret at a time. It was also Marjorie’s idea that the secrets be made public so that people would not feel so alone, as she had for so many years, hiding her virginity in her underwear drawer. “If we all knew each other’s secrets,” she reasoned, “we could never use them against each other.” Though Bruce had his doubts, he nodded pleasantly. Who was he to disabuse her of her naïve notions, especially since they kept her so happy and motivated?

To humor her, he made an appointment with the editor of the Daily Reporter, who wrote a profile of Bruce that was published in the weekend edition. This attracted a few internet magnates, which in turn alerted a couple of magazine and book editors, who drew in a trio of harried television producers not wanting to be left behind. Bruce invited all of them to the conference room of a medium sized-hotel on Visitor’s Lane and told them his story while they took furious notes.

“As many people as there are willing to divulge their darkest secrets, there will be that many more who will pay to hear them,” he said, fanning a dozen unopened envelopes on the table before them. The publishers cleared their throats, the TV producers scratched their double chins, and the internet magnates drummed stubby fingers on the table. They were all used to making decisions based on statistics and market research and 30 page

proposals written in legalese by experts, not on the sentimental and hyperbolical claims of a man who looked like a schoolteacher. But they were dying to know the secrets contained in the innocuous envelopes spread before them. Like rabid squirrels they descended upon them, tearing them open as if they contained a million dollars instead of one. And as they passed the hand-scrawled notes amongst themselves, they laughed and they wept, felt repulsed, afraid, and finally relieved. “There is nothing more tempting, more satisfying than a secret,” Bruce told them in closing, and the businessmen nodded solemnly and shook his hand.

A thick, glossy magazine featured an interview and a photo spread of Bruce and Marjorie at home receiving the bags of mail on their front porch from a smiling postman—not Murray, who was mildly offended. Though reluctant at first, Marjorie even gave permission for her secret to be included with the article after Bruce convinced her it would set an example. Hers was a story that everyone could get behind, he said, a love story and proof that telling your secret improved your life in ways you could not even imagine. Marjorie 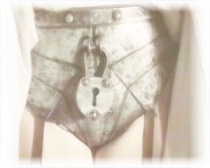 nodded and sighed, and went into the stacks to find her secret. After the article was printed, a support group called United Virgins of the Lower West Side wrote to Marjorie, declaring her their spiritual leader. She wrote back that although she was honored, she had no time to attend their meetings as there was far too much work for her at home. In addition, as she was no longer a virgin, she was uncertain whether she had anything to contribute. She had other secrets now, but these she kept to herself.

For the most part, Marjorie was thrilled that her initiative had been met with such enthusiasm, and was even willing to give Bruce all the credit for it. But she had one concern. Despite her general trust in others (all those years as a virgin had shielded her from the most unpleasant of humankind’s neuroses), she was worried that with all the publicity, too many people now knew where they lived.